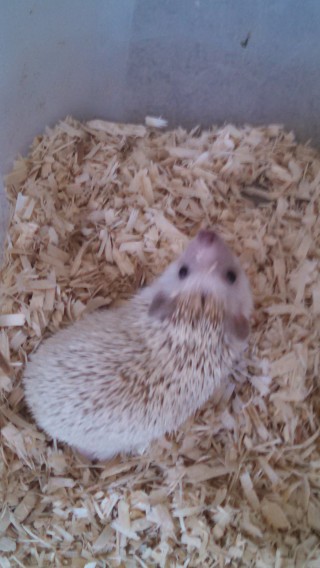 One of the most common questions I’m asked can be summed up in this post title — What kind of commitment is a hedgehog? It is a good pet for my classroom, my child, my teenager – how long do they live? What is it like to own an exotic pet?

Now, I’ve previously said here that a hedgehog is not terribly difficult to take care of. That is still true.

They’re easy pets to care for if you know what you’re doing.

That is a very large if.

Hedgehogs require research. They require having a vet on hand that you hopefully won’t need to use too often. They also require a lot of patience.

Which is to say, hedgehogs are a large commitment.

They aren’t a commitment in the way that a dog or a cat is. Hedgehogs are not going to be following you everywhere, an they aren’t going to be demanding attention and needing a lot of time to play. Instead hedgehogs are going to need you to be willing to look up information you don’t have an immediate answer to – and possibly look up information that your vet might not know. They’ll require your patience as they prick up and are scared, they’ll require a daily commitment of spending time with them so you can get to know them and their personality properly. These are a very different animal from cats and dogs, but a very, very rewarding one if you’re willing to put in the proper time and effort for them.

Apologies for the lack of updates lately. We’ve had a rough year, but are looking forward to a much better one in 2015. Watch this space, changes are coming and many more updates.

Our little girl Emma went off to her new home today! We’re keeping her brother Jack, so this is the only adoption happening from Frozone’s litter. Luckily, it seems our girl Jenny might be having a prickle in just a few weeks…

Goodbye, Emma. I know you’re going to get along just fine in your new home.

These two adorable hoglets were born to Frozone and Watson on June 13th, 2014. They’re our first successful litter this year, and already are quite the handful. Having a litter this small allowed the hoglets to grow far more quickly than Moriarty’s litter did last year. At three weeks they were already frighteningly large and active, crawling around on their wobbly legs.

They’re doing very well these days and thankfully reaching the end of their teething. It looks as if Loki is going to be a lovely platinum girl and Mr. Jack a striking dark grey boy. Coming from Frozone they both carry the possibility of having platinum colored hoglets and with Watson’s genes there is a high tendency for salt and pepper as well.

They both have some very cute coloration on their feet that makes it look like they’re wearing socks.

Right now we just feel very lucky to have such beautiful hoglets after our recent loss of Watson.

Ever wanted to meet a hedgehog in person? Have questions to ask, but don’t feel like doing it online? Then we have the perfect opportunity for you!

Saturday 19th from 11 – 3 we’ll have a table at the Fallsgrove Petvalu with two prickly friends for everyone to meet!

Come by, ask questions, pet a hedgehog!  If you ever wanted to know what the spikes feel like – now is the time to find out!

It’s been a while since we’ve posted here, but a lot has been going on with Otherworld Exotics in the interim. Just a few short weeks ago we took a trip up to Buffalo, New York to visit the incomparable Hog Heaven Hedgehogs. We got to visit their hedgehogs and tenrecs, and more importantly, add two new beautiful girls to our herd. 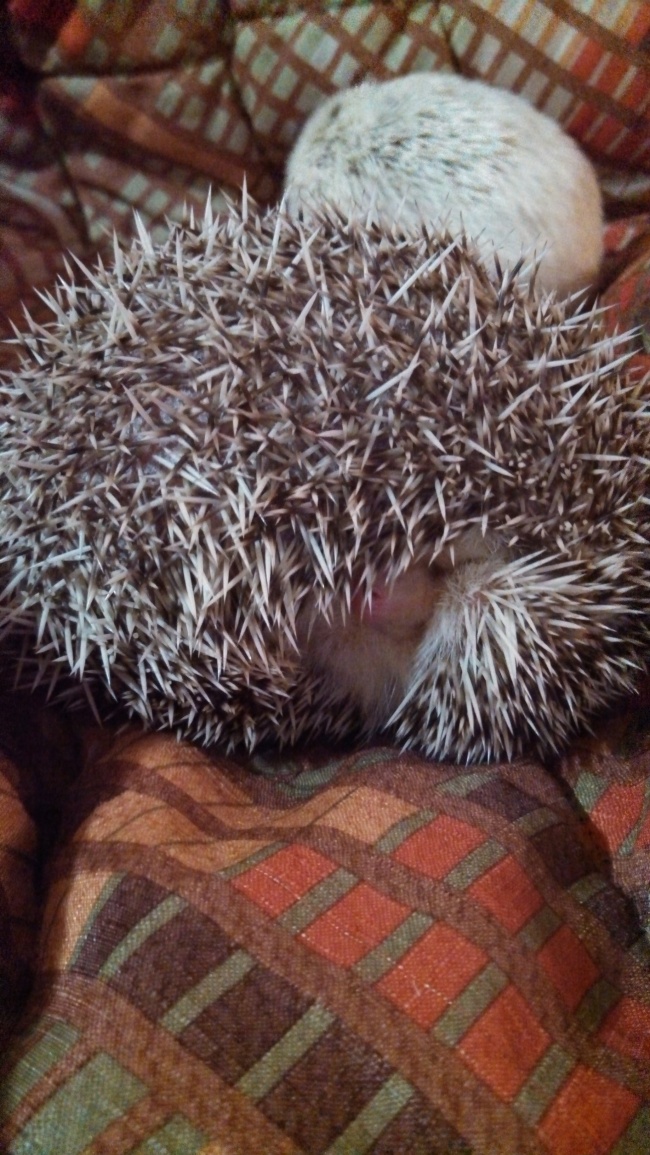 Here are our new girls! 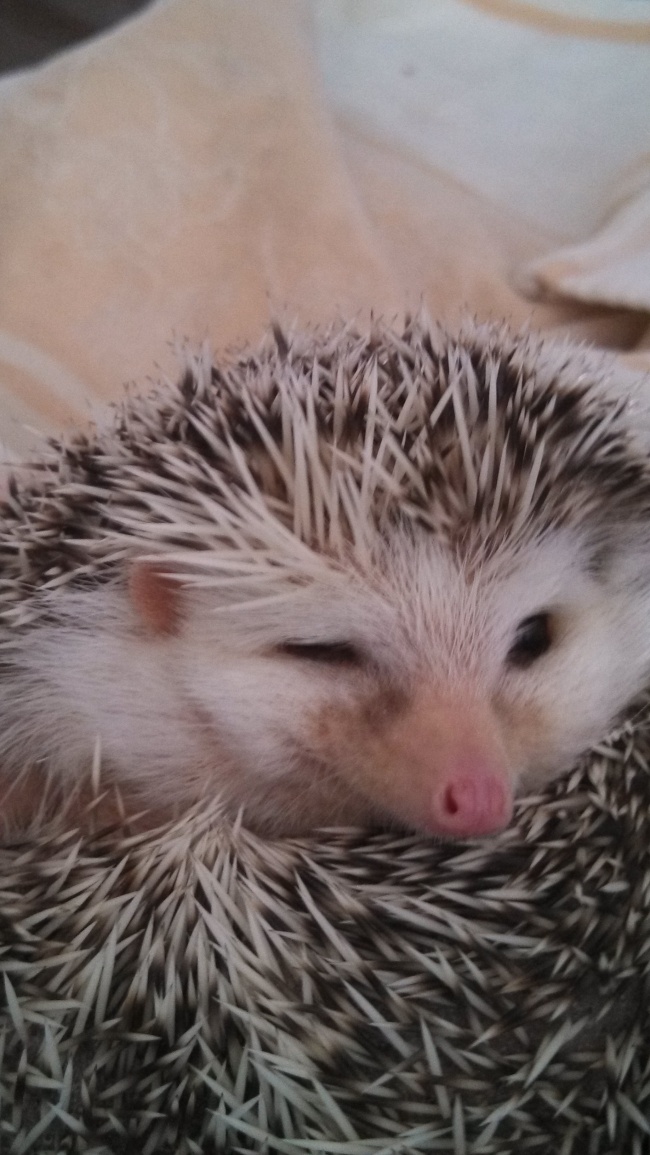 Jenny is around 10 weeks old and a bit, well, large for her size. It seems that as each of her siblings got adopted she began making up for the loss by eating their food, and eventually was eating for six. Oops. She’s been put on a diet since she joined us, and happily given a wheel. It’s rather amusing seeing a hedgie have to jog rather than run, but she’s been steadily decreasing in girth in a healthful way. 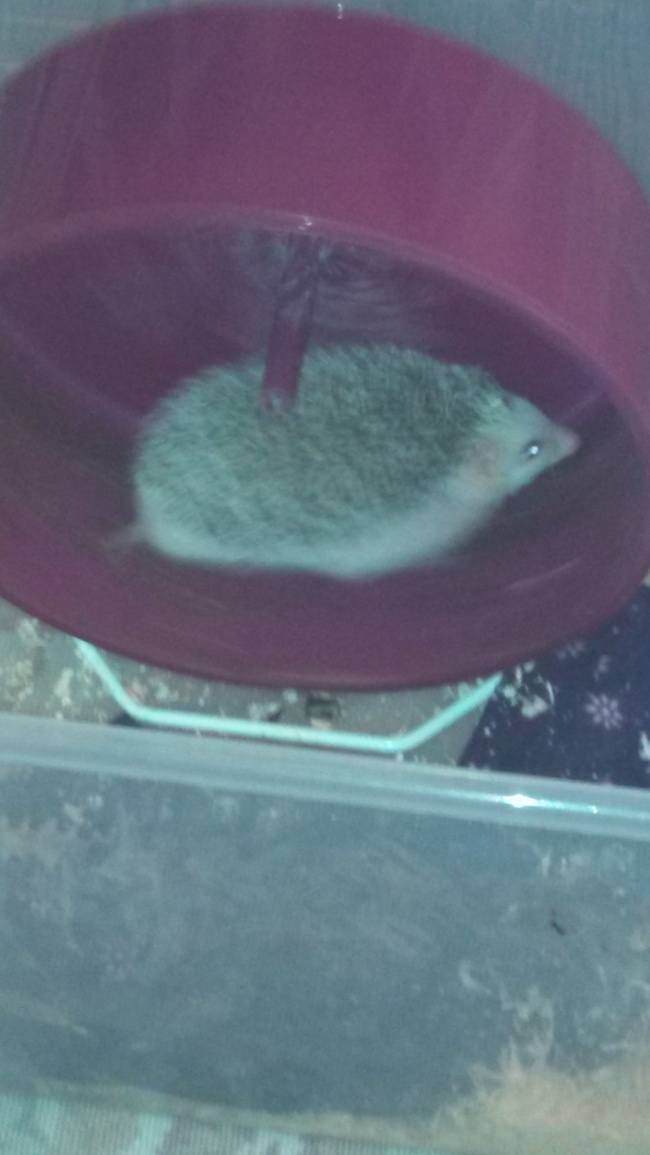 Jenny has a need. A need for speed. 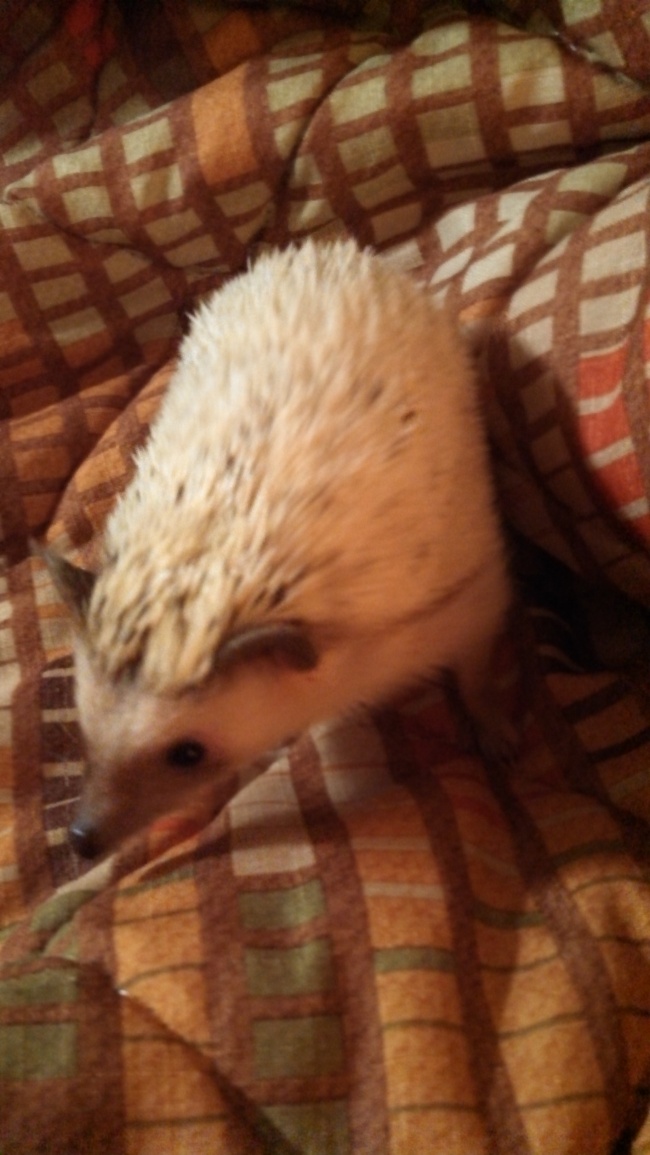 This is Frozone, a rather happy hog. She’s about a year old now, and is a chocolate chip girl.  She comes from a platinum line, and is very close to being so herself. We’re hoping we might get some double white hoglets in our new litter with her! She’s extremely outgoing, and was actually going to be kept as a pet before we got her. We put Watson in with her recently, and fingers crossed, will probably have a prickle born around April 20 – 30…

In other news, Niagra is positively beautiful in the wintertime. The day we arrived a blizzard had just passed over and it did snow while we were there… 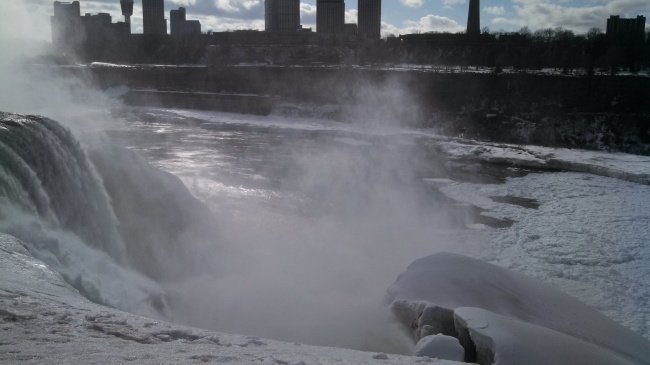 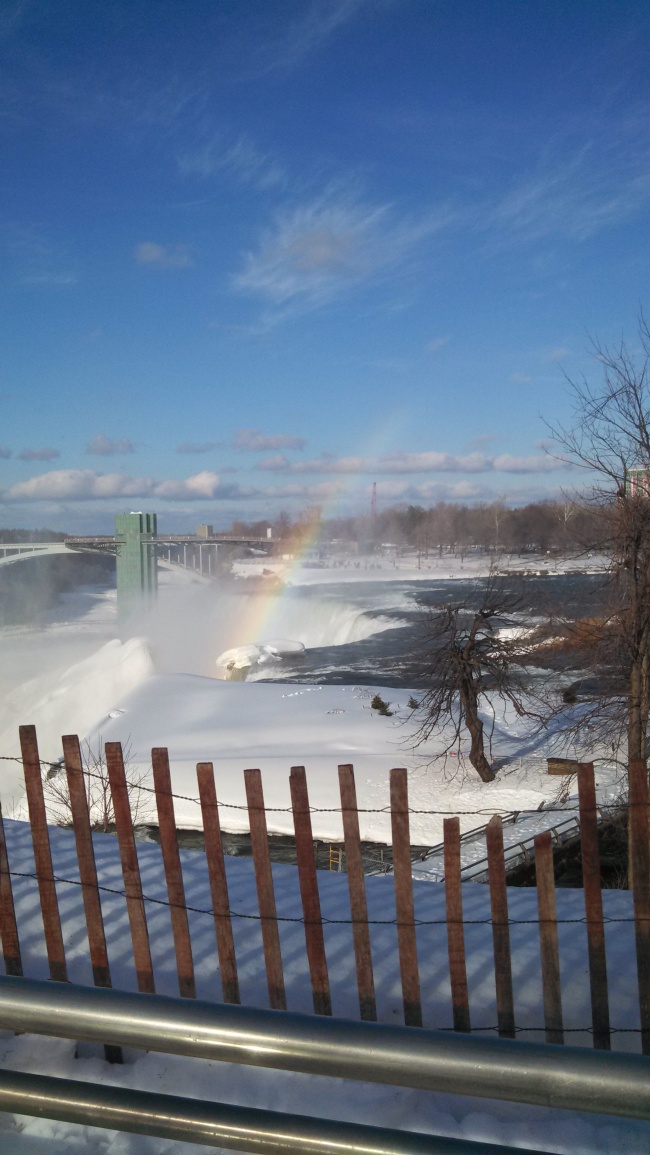 We even saw rainbows

One of the many delights of the hedgehog is how incredibly weird they can be.  It’s been said that one of the biggest problems encountered when attempting to do a scientific survey of the species is the difficulty of stating any generalizations about them. The males may be bolder than the females… except for these females. The females may typically be larger than the males, but here are some big boned boys. It seems that the hedgehog endlessly contradicts any attempts at classification. But isn’t that part of their wonder?

Every hedgehog owner has their stories of just how odd their hedgie’s behavior is!  For instance, our boy Sebastian has a a very special distinction that none of our other hedgies quite have. When we first rescued him, he was often just a spiky ball of quills. He refused to open up to us – not for treats, not for food, not for anything. We even set him down with one of our females. Would he open up to say hi to her? She licked his quills and he complained in huffs and growls that really, really confused the girl. She eventually gave up. He seemed satisfied then. As satisfied as a ball of spikes can be. 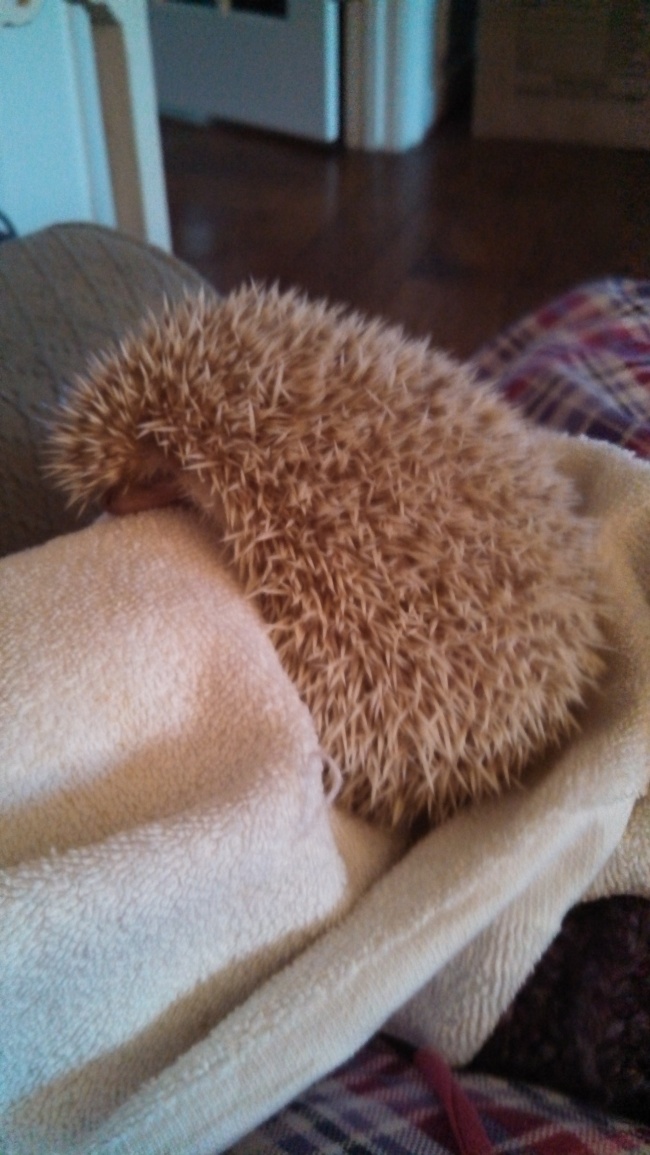 There was only one way to get him to uncurl for any amount of time. The uncurling was important, as it let us feel his belly to see if his fever had broken and touch him more so he could gradually get acclimated to it. Nowadays Sebastian is a very playful, much more gentle individual. He enjoys being held to some degree, enjoys cuddling much more when we don’t touch him. He’s mouthy, much more vocal than the others. He’s still quite a piece of work, but at least now he’s healthy and a good pet.  And he’s still extremely, extremely ticklish. 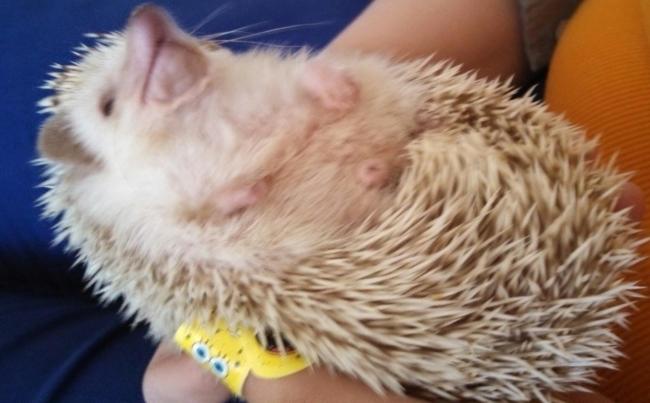 More than any of our other hedgies Sebastian enjoys being tickled. He stretches out into it and uncurls from a ball. He relaxes into it to the point that sometimes his front legs are up above his head and his eyes are shut in an expression of bliss. It works on both sides – between his shoulders and near the base of his spine. It’s utterly ridiculous. He stops complaining when we do it, and sort of flops back and lets us have at it. It’s truly an experience, tickling a hedgehog.

This trick can be especially helpful at the vet. If you have a hedgehog that complains during its annual visit, I recommend you give tickling a try. A tentative try. The spines can be difficult to work your fingers between, but practice does make perfect. Sometimes even just rubbing the tips with your fingers can initiate this sort of response.

I warn that this trick won’t always work, but when it does it’s truly hilarious to see. 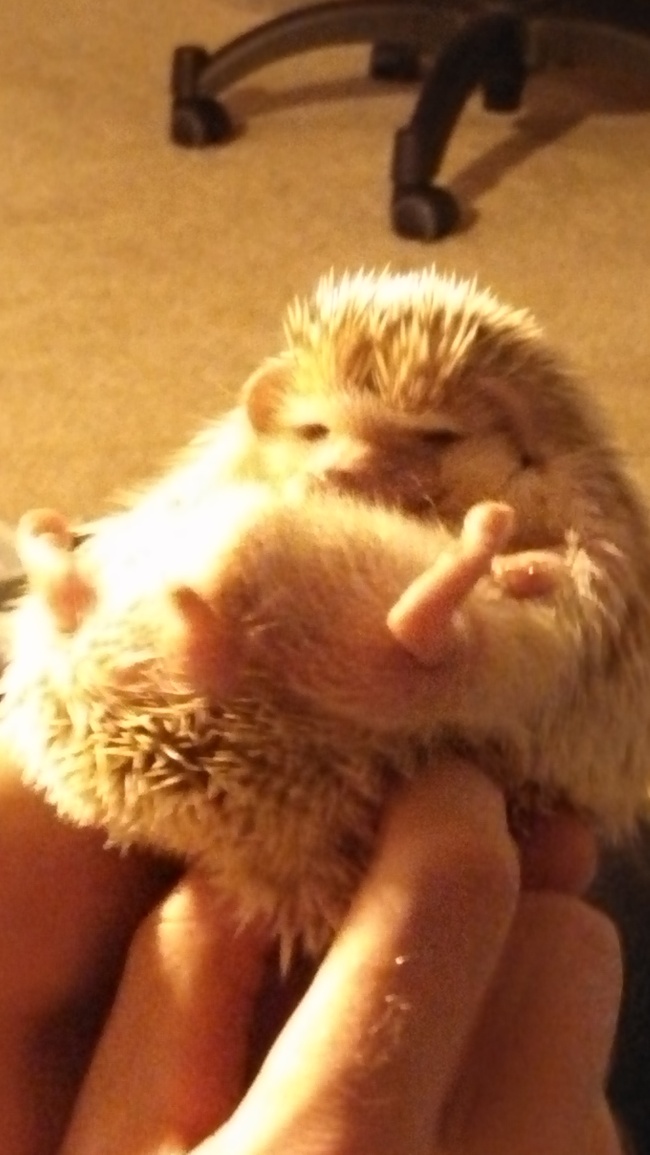