Púca was our first hedgehog, born April 2nd 2013. She’s a high pinto, with a full light gray mask. While her tiny stature prevents her from breeding, Púca is the star of our educational presentations. Her outgoing personality, willingness to play, and natural curiosity make her a perfect hedgehog ambassador. 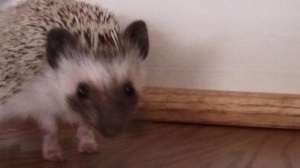 Moriarty was born May 2nd 2013. She’s a low pinto with a full dark mask and some coloration on her legs. While she is also a hedgehog ambassador, constantly seeking out cuddles and attention, she is also our breeding female. She’s so well socialized she’ll show off her hoglets to anyone provided she gets her chin scratched and is fed plenty of treats.

Sebastian was born April 22, 2013. He’s a cinnicot male, with an adorable pink nose and a white facial mask. He has the personality of a hoglet, still mouthing at most things that come his way and huffing in annoyance when he struggles to self-anoint. He’s our first rescue, and with our help he’s changed from a ball of quills resembling a blowfish to a curious, if cautious, hedgehog.

Sebastian is an excellent example of how socialization is important to hedgehog development – and likewise, just how far proper care and ownership can go in improving an animals life.

Watson was born April 8th, 2013. He was a dark cinnamon male, with a full facial mask.  He had a liver colored nose, and an outgoing personality. He warmed up to people quickly, and had by far the most vocal purr of our prickle. His antics endeared him to everyone who had the pleasure to meet him, and he passed down his entertaining curiosity to all his dear hoglets.

Trader Joe the PiRat is a beautiful one-eyed Siamese. He lost his eye due to freak accident at a very young age, but he hasn’t let it slow him down in the least. He is a very loving little rat, and is just as willing to fall asleep in your hand as Griffin is. He has been learning to be a very kissy rat, just like Curly Joe. As a Siamese, his markings are beginning to come in so he looks like quite the toasted marshmallow. We’re eager to see how his personality develops as he gets older, but for now he is learning from the best and growing up into quite the affectionate, cuddly rat.

Fitz is one of two surrenders that we recently received. He is a jumbo rat, likely intended to be a feeder, with fur as amazingly curly as Curly Joe’s. Curly Joe himself has quite taken to Fitz, and views him as a mentor as well as a potential pillow for the near future. While Fitz entered our care fairly shy and nervous, he has blossomed into a true cuddly beast. He will likely be showing up a fair bit alongside Remy in our educational presentations. He is also sure to be a hit with everyone who meets him when they come to visit our menagerie.

Remy, named for the rat in ‘Ratatouille’ is the second surrender that we recently received. Another jumbo rat, he has certainly lived up to his name in being the spitting image of the rat in the movie. He is also one of the cuddliest rats we’ve had, always willing to snuggle up against whoever is holding him and accept as many pets as a person is willing to give. He’s begun to show quite the penchant for licking, as well, and will be showing up in future presentations quite a bit with his brother Fitz.

Peralta is the first of our Pink Eyed White twins. He is a curious rat, always eager to find someone new to pounce on and wrestle with. He’ll follow your hand if you tickle him, so long as he isn’t distracted by another rat in his vicinity. Peralta is the first rat to Kissy Korner in our cage any time someone walks into the room. He’s taken Trader Joe the PiRat under his wing, with Griffin by his side, and is very protective of him. These two are very eager kissers, and have been teaching the others to follow in their footsteps and become more tongue than rat.

Kit Snow: The Rat in the North

Kit Snow is a remarkable rat. We like to describe him as our roommate rather than our pet due to the independence that he has habitually shown. In spite of him being more of a loner than the rest of our rats, whenever we let him run free he’ll inevitably surprise us by hopping up on our laps and deciding to practice some “rodentistry.” Kit Snow has made introductions a breeze. He loves playing with the new babies, even now in his old age. He’s always eager to meet new rats and people both and never turns down a kiss to his belly. He’s not a kisser, but his personality more than makes up for it.

Luna is the second hedgehog  that we are watching for our friend. After rescuing two hedgehogs from us, our friend ended up rescuing a third when she heard of a coworker looking to rehome her hedgehog. Luna, while the more anxious of the two hedgehogs, is still a hedgehog that is willing to curl up in your hand if you stick it in the snuggle sack with her. She snores in her sleep, and is willing at times to even accept tummy rubs. From neglect, to a loving home, to a temporary foster situation where she is enjoying far too many treats. It isn’t a bad life for a hedgehog.

Jasper is an elderly hedgehog who was surrendered to us from a loving home. He is a charming little fellow – more fond of sleeping now than being brought out of his cage for playtime. In spite of his age he is still active, still sporting all of his teeth, and still able to self-anoint as well as a younger hedgehog. We’re happy to see him as busy and limber as he is. While he is adoptable, we would prefer he end up in an experienced owner’s home due to his age and the troubles that can come from that.

Noodlez with a Z [ Has been adopted and is now Ms. Beatrix and happy in her new home! ]

Noodlez is one of our favorite hedgehogs. I say this often, but I nonetheless mean it. Missing one eye, and blind in the other, she still goes through life much like a fully sighted hedgehog. She is one of the fastest, busiest runners we have ever had the pleasure of keeping. The moment anyone enters the room and she hears their voices she is out of her log-hide and running figure eights around her cage. In fact, she runs these laps so much that she eschewed any use of a wheel in favor of paving her own racetrack. Noodlez is an utter delight to watch, although still uncertain of being handled too much. It’s easy to spook her due to the fact that she can’t ever see you coming.

Apollo came to us under unfortunate circumstances. Surrendered to us not by his owner, but by the owner’s girlfriend, he didn’t even have an actual name. We were told that they “thought” it was “Elius.” When visited by another adopter and her daughter we let the daughter rename him and he was christened Apollo. Apollo is still a more nervous hedgehog, primarily due to not being handled enough. He’s fond of being pet and being held, and with him being one of our ambassadors until he’s adopted, he’s certainly been attracting attention. In the right home he is certain to flourish, and is liable to become quite the cuddly hedgehog given time.

Marty McFly is a very unfortunate hedgehog. He was surrendered to us by a family that bought him from a breeder and tried for over a year to tame him down. After many pricked hands and frustration they gave him to us, and in this situation we adopted out a hedgehog to them in exchange. While Marty is adoptable, he is an intimidating, grumpy man. He will be being fostered soon by my apprentice who hopefully will have much better luck than anyone else has had with him thus far…

Pan is an interesting case. She came to us several months ago, a reluctant surrender that was entirely due to an unknown medical condition. She seemed to be sprouting tumor like growths over the whole of her body – but they weren’t tumors, and in fact could even be peeled off with dedicated attention and a patient hedgehog. After months of trying different solutions we ended up discovering that she, in fact, had a form of mange. Since then we’ve been treating her and she has been healing with leaps and bounds. We hope to get back in touch with her owner soon so that she may find her way home – if not, then she will be finding her way to our adoption page. She’s an outgoing, very round hedgehog. She’d do well for someone looking for a snuggly pet once she is fully recovered.

Agent Cooper came to us from the delightful Christine Matarese of Curious Creatures Rescue. He came to her from a hoarding situation that saw somewhere around 20 hedgehogs living in a bin in a closet! As a result of his former life, he is still learning to trust people and is skittish around them. As an ambassador he is representative of the way hedgehogs are far too often neglected, and the way that can affect their personalities. In the time that we have had him he has begun to open up, and we are hoping over time that he will prove to be a success story. Many hedgehogs have come to us in similar situations and learned to be the sweet creatures that all hedgehogs can be.

Pimento also came to us from Curious Creatures Rescue. He was the result of an accidental litter from the hoarding situation described above. Luckily, his mother came to the rescue pregnant, so he didn’t spend any time at all in the bin in the closet. He’s a very active, curious, wriggly hedgehog who can’t get enough of the world around him. As an ambassador he is certain to delight everyone around him with his silly antics and outgoing personality. In time, perhaps he’ll calm down, but for now he is the largest baby we’ve had – and also the funniest. He likes nothing more than snuggling up on a person’s shoulder, sniffing the air around them.

19 thoughts on “Past Creatures”